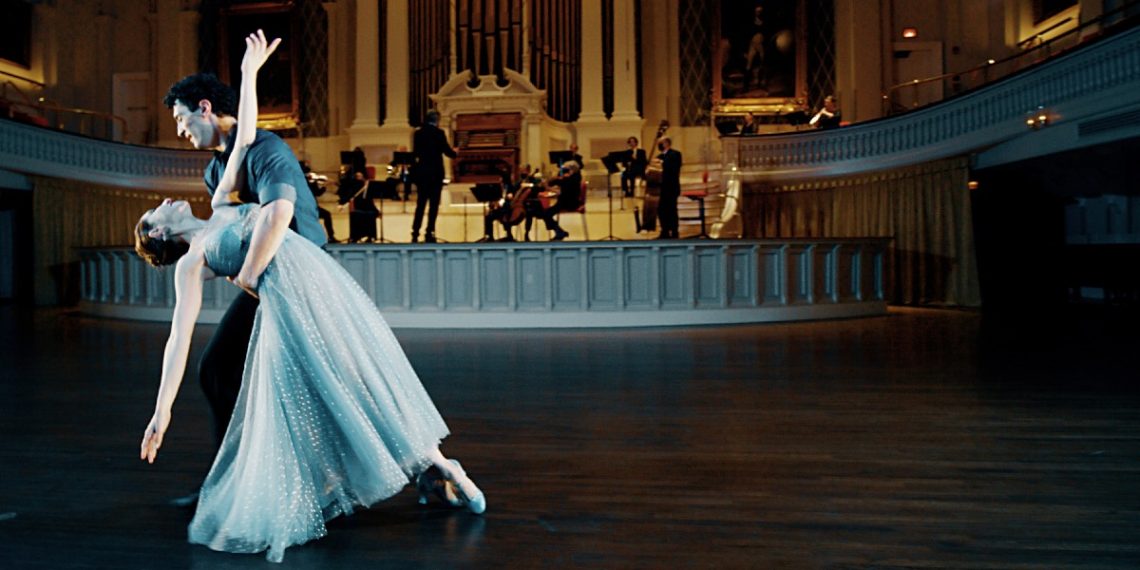 In its continued campaign to bring art to people’s homes, Boston Ballet released the next episode of its Chamber Music Series – Dreams and Reflections – which exposes the audience to the nuances of Johannes Brahms and Richard Wagner with beautiful piano playing and accompanying choreography.

Set to Brahm’s Six Pieces for Piano op. 118 is Triade, a ballet for five of the company’s dancers choreographed by Principal Paulo Arrais. Filmed in Boston Ballet’s South End studios, it opens with Chyrstyn Fentroy embodying the dramatic tone of the Intermezzo (played by pianist Alex Foaksman) in a cabernet-colored dress whose plum hues are accentuated by the lighting.

Music-only movements follow during which Freda Locker alternates with Foaksman at the keys.

Tyson Clark, Viktorina Kapitonova, and Paul Craig barely come out of silhouette in the Romanze movement languidly transitioning from one multi-corporal creation to another, all of which are also warmly reflected on the Marley.

And in the final Intermezzo, Sunwoo Lee seems to toggle between anguish and acceptance in a haunting solo whose ending sent chills down my spine.

Arrais shares the following about his piece:

I read a book about the triangle between Robert Schumann, Clara Schumann and Johannes Brahms. Brahms composed this work in homage to Clara Schumann, who he was in love with and helped once Robert was sent to a hospice. There are famous love letters between the two.

While reading it three things jumped to the forefront of my creativity: women strength, polyamory and mental health.

Triade is about the relationship between those three master composers. Husband, wife, pupil, teacher, friend and lover… this is the intricacy between them! We often judge and find it strange when a relationship doesn’t follow hetero normative values. As a deconstructed gay man, I want to create about it, I want to talk about it.

Principal Dancer Lasha Khozashvili’s Awakening, created for himself and wife Ekaterine Chubinidze, is somewhat reminiscent of what we see in the Vienna Philharmonic’s annual New Year’s Eve concert.

Cameras capture from different angles the Boston Ballet Orchestra playing Richard Wagner’s Siegfried Idyll and the pair as they dance throughout the elegant space of Mechanic’s Hall in Worcester, MA.

Dreams and Reflections, along with the previous episodes of the Chamber Music Series, can be found here on Boston Ballet’s website.

Cherilyn's lifelong passion for ballet has opened the door to the next chapter of her journey. Her strong foundation includes training at the School of American Ballet, being a featured dancer with Hartford Ballet and Carolina Ballet, and being co-director/owner of City Ballet Raleigh. She was granted the Affiliate Teacher Award after successfully completing the ABT National Training Curriculum®. A professional career in the industry along with extensive global travel provide her with a unique set of experiences to draw upon as an audience member. Cherilyn is excited to be sharing her insight about ballet around the world.

Tune in to hear the latest performance reviews and featured news about happenings in the ballet industry. Narrated by Editor-in-Chief Cherilyn J. Lee and guest artists, these stories from The Ballet Herald will be your source and entertainment on a relaxed day at home or when you're